The band, formed in summer 2007 by keyboardist Daniele Mazza, delivers a Symphonic Metal in constant evolution. Ancient Bards were able to make an excellent name for themselves on the local scene before firmly establishing their brand of music worldwide, thanks to the release of their first three LPs, all acclaimed with convincingly positive reviews. As thematic influences, they chose a mix of fantast-based Nordic sagas and Japanese tales such as the Final Fantasy series. The band intensively expanded their thematic and musicianship and played at numerous festivals and shows, like Wacken, Made of Metal, FeMMe and others.

Since day one, ANCIENT BARDS have taken a variety of influences from symphonic metal’s rich heritage and forged their own unique blend of magnificent orchestral symphonies, crushing guitar riffs and the breathtaking vocals of their front girl Sara Squadrani.
The music is conceived to enhance the listeners’ experience by taking them on a ride into the magical world where the fantasy saga “The Black Crystal Sword” is set.

The first three albums “The Alliance of the Kings” (2010), “Soulless Child” (2011) and “A New Dawn Ending” (2014) cover only the first part of the saga, which features ancient mysteries, entangled schemes and strange revelations that lead to a long and intense battle. The upcoming record “Origine”, which will be the first chapter of the Saga’s Part 2, gives promise to the fact that… the best has yet to come.
Such an ambitious mission calls for extraordinary musicianship to be rendered on stage with the right balance between technique and passion. ANCIENT BARDS answer that call with Claudio Pietronik’s phenomenal guitar virtuosity, Daniele Mazza’s bombastic orchestrations, Martino Garattoni’s killer bass groove, Federico Gatti’s ever-pounding drum engine, Simone Bertozzi’s aggressive riffs and harsh vocals and of course Sara’s angelic yet powerful voice. 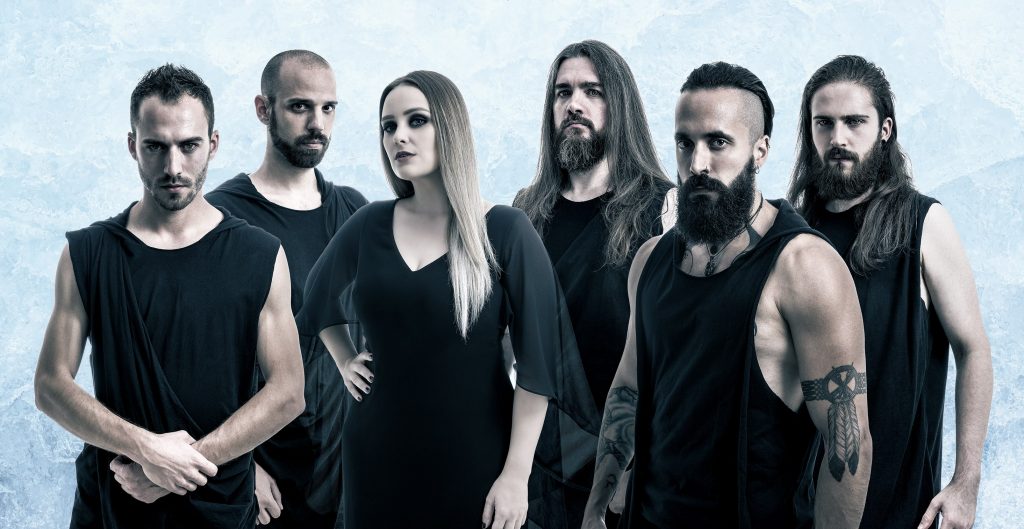 Click here for Info & Biography - long version
Although musical similarities to Rhapsody and Rhapsody Of Fire can be suggested and have in fact followed the ANCIENT BARDS since they first got together, it can also be said that this Italian quintet, with their overwhelming vocalist and front girl Sara Squadrani, have taken such influences and consistently gone their own way, establishing their own unique niche in today’s world of symphonic-epic metal.

Their style may seem to have polarized the band somewhat, but they remain adamant in realizing their musical vision and balancing their preferences. Their symphonic epic metal is cleanly prepared, clean working, superbly played and it is apparent that the ANCIENT BARDS not only have fun and enjoy their work but approach it with a dedicated conviction.

It comes therefore as no surprise that they have once again set new musical accents with their third album, “A New Dawn Ending” which takes up and continues the storyline of The Black Crystal Sword told to us through their first two albums, “The Alliance of the Kings” (2010) and “Soulless Child” (2011). Musically, the band has continued to mature and, during several songs on the new album they can even be compared with Within Temptation. “A New Dawn Ending” is the consequential development from their previous works and will attract everyone who loves bombastic symphonic power metal. 2014 is going to be a really successful year for this Italian symphonic metal band, because with “A New Dawn Ending” they have a true ace up their collective sleeves.

In their early days the band, formed in summer 2007 by keyboardist Daniele Mazza, were able to make an excellent name for themselves on the local scene before firmly establishing their brand of music with their 5-track CD entitled “Trailer (of the Black Crystal Sword Saga)” a year later. The convincingly positive reviews gave the ANCIENT BARDS an enormous boost. As thematic influences, they chose a mix of fantast-based Nordic sagas and Japanese tales such as the Final Fantasy series. The band intensively expanded their thematic and musicianship and played at numerous festivals and shows between 2008 and 2009, for example with Turisas, White Skull, Almah and Domine. The shows gave the six band members more self-confidence and in summer 2009 they began recording their debut album. The epic choir Toto Corde and several guest musicians, friends of the band, also took part in the recordings.

In March 2010 “The Alliance Of The Kings” was released on the LIMB MUSIC label in most countries, and distributed by Spiritual Beast in Japan and Asia. The reception in the press was euphoric and reviews in the metal press described the album as one of the album highlights of 2010! “The Alliance Of The Kings” thrilled everyone who loves epic-melodic, classical-bombastic arrangements and who were looking for a sound that could fall in line with established bands such as Nightwish, Rhapsody, Epica and Delain. During the rest of the year, they played live in numerous areas of Italy with bands such as Manegarm, Heidevolk, Korpiklaani, Eluveitie etc. and when they weren’t out playing gigs they began the work on the follow-up album to “The Alliance Of The Kings”.

First, though, they had to sort out a line-up problem. Drummer Alessandro Carichini left the band for private reasons and was replaced relatively quickly by Federico Gatti. It was in this new configuration that they continued to work on “Soulless Child”. The Black Crystal Sword saga continued when, in June 2011, they put the finishing touches on the album which was produced in San Marino by Simone Mularoni. The reactions to the Italians’ second album were extremely positive which led to the band working even harder. In 2012, they released a video clip to “Through My Veins” which had been filmed at the Gods of Folk Festival.

In the Spring of 2013 vocalist Sara was invited to work on the album “The Theory Of Everything,” the latest Ayreon project by Dutch composer/musician Arjen Anthony Lucassen (released in November 2013). She was part of a list of star artists to participate amongst other names such as Marko Hietala (Nightwish), Rick Wakeman (Yes), Christina Scabbia (Lacuna Coil), John Wetton (Asia, King Crimson) and Keith Emerson (ELP).

In the same year, the ANCIENT BARDS began work on their third album in Simone Mularoni’s Domination Studio and completed the studio work in early autumn. For this album, the band managed to win vocalist Fabio Lione (Rhapsody Of Fire) as a guest singer for the song “The Last Resort.” However, the band also experienced another line-up change when guitarist Fabio Balducci decided to leave the band for personal reasons. Despite this setback, the album was all set to go at the end of 2013. With the title of “A New Dawn Ending” for their third album, the ANCIENT BARDS continue and bring to a close Part One of their thematic saga and the aggressive tendency of the work together with an even wider epic spectrum hypnotize the listener from the very start.

The ten songs on “A New Dawn Ending” with over seventy minutes of playing time are perfectly balanced, excellently performed symphonic epic metal with loads of feeling and variety. The band has moved away from the overly fast power metal style of their preceding albums and have taken their songwriting audibly deeper. The album is built up around the title track and its long track, “Showdown”, both of which underline all the most impressive and concise elements of the band. “Showdown” is equipped with a remarkable bitter-sweet melody which, once heard, tends to stay with you for a while. The almost frenzied ending with a classical rhythm is absolutely feudal in character! “Across This Life” swings between fast riff attacks and classical, orchestral parts for which Sara Squadrani presents an excellent singing job which, here and there, reminds one of Sharon den Adel (Within Temptation). It is one of the few very fast tracks with galloping speeds in the middle section and a classical guitar part which underlines the epic spectrum of the track. A further highlight is the almost seven minutes long “Flaming Heart” which is the epitome of the term “classical influence”. This is a schoolbook track which exemplifies the subject of symphonic epic metal – greatly entertaining! The album is rounded off with superb cover artwork from the house of Felipe Machado Franco, who has, in the past, been called upon by bands such as Blind Guardian, Theocracy, Iced Earth, and Rhapsody to name a few.